Gentleman Hackers will be a six-book daddy kink gay romance series set in the world of the Shifting Isles, chronologically before the Matchmakers series and spinning off directly from Return to Tanas (Shifting Isles, 3).

More books to be added as release dates approach.

Kidnapped by his idol? Yes, please!

Connor Jenkins is sick of rejection. Now, instead of getting close to anyone, he lives vicariously through other people’s phones and webcams. Thanks to his skills, he always gets away with it.

Until he hacks his idol.

Brendan Shyth is haunted by loss. First, the death of his boy. Then the end of his music career thanks to a grief-induced drunken accident. Fringe science regrew his fingers, but he still can’t bring himself to play again. Avoiding his fans, the media, and his manager, Brendan hides in his mansion, determined to be left alone.

Until he finds his webcam on and realizes someone is watching him. Someone other than the ghost of his dead lover, that is.

Brendan has Connor tracked down and kidnapped, meaning to teach him a lesson. But the teasing brat gets under his skin in a way that no one has in years.

A boy in need of security. A ghost in need of acceptance. A man in need of faith. With a career, sanity, and hearts on the line, can these men overcome their fears before it’s too late?

Restored Ruins is the first book in the Gentleman Hackers series. It features a boy whose hair color never stays the same, a daddy who puts him in serious time-out, a ghost desperate to be seen, and an MMM HEA ending. No pianos were harmed in the writing of this romance (though they do make good horizontal surfaces).

Available on Amazon in paperback, Kindle, and KU. 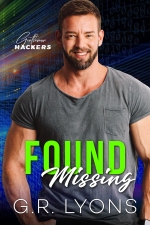 A cryptic note is the only clue to his identity. And now he’s falling for the man who took his memories.

Levi Owens woke up in a hospital a year ago with no memories and nobody to claim him. The only thing in his pockets was a handwritten note with one word: Twin???

Starting his life over from scratch, Levi discovers a talent for crime and uses those skills to search for this supposed twin, hoping it’ll help him find himself. Levi avoids all relationships, not knowing whom to trust, but when a rushed break-in gets him caught, he meets a man who makes him want something more.

Nash Turner made a horrible mistake a year ago, one that nearly cost a boy his life. When Levi shows up in Nash’s office with no memory of what happened, Nash knows the time is coming to finally pay for what he did. But Levi is also a temptation, one that Nash can’t resist.

Will Nash help Levi find the truth and risk their happily ever after?

Found Missing is the second book in the Gentleman Hackers series. It features a gentle daddy with a guilty secret, a lost boy in need of love, a major identity crisis, and an HEA ending. And Levi totally loves stuffies and cuddles, even if he won’t admit it out loud.

Available on Amazon in paperback, Kindle, and KU.

A scarred beast. A strong-minded beauty. Can one thaw the other’s cold heart before it’s too late?

Thomas Pennington has spent his life trying to make himself worthy. After being ostracized by his own people, he came to a new land, gave himself a new name, and clawed his way to the very top of society, only to be struck down by someone he thought he could trust. Hiding the scars from that ordeal, Thomas isolates himself in the dark until a beautiful, confident boy turns everything on its head.

Hayden Ross is suddenly broke and homeless, but he still owes Thomas for trespassing on his property. When Thomas proposes an unusual arrangement—one that defers Hayden’s financial woes—Hayden jumps at it. Thomas wants to punish him, but Hayden is determined to prove he’s man enough to take whatever Thomas throws at him.

Thomas clings fervently to his traditions, which won’t let him love another man. But the more Hayden surprises and impresses him, the more he finds himself falling.

When a plot against Thomas puts Hayden in danger, will Thomas risk everything to save him?

Genuine Imitation is the third book in the Gentleman Hackers series. It features a mouthy trans boy, a grumpy billionaire determined to put him in his place, bi-romantic awakening, a ransom plot, and an HEA ending. And Hayden isn’t the least bit sorry for making Thomas work for it.

Coming soon to Amazon in paperback, Kindle, and KU.