A male/male romance trilogy set in the world of the Shifting Isles, taking place around the time of Books 8 and 9 in that series. 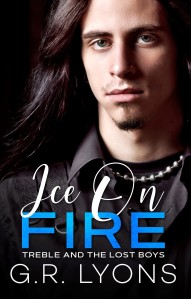 Ice on Fire (Treble and the Lost Boys, Book 1)

Zac Cinder is on the verge of making his dream come true. His punk rock band, Inferno, might have a shot at an audition for a record deal. Fame and fortune would mean he could finally help his parents. They’d raised eight kids in a loving household while barely scraping by, so Zac is determined to give back in any way he can.

Keeping Inferno together, though, means keeping his biggest secret. His bigoted bandmates would drop him in an instant if they found out Zac was gay.

Then he meets Adrian Frost, and Zac can’t resist the shy man. Adrian gives up everything to be with Zac, but Zac can’t bring himself to do the same. He doesn’t want to lose Adrian, but he can’t give up Inferno, either. Not when he’s so close to realizing his dream.

When one cruel decision rips Adrian from his life, Zac will have to decide if ambition is worth the price of the greatest happiness he’s ever known.

WARNING: Contains scenes of self-harm that may be disturbing for some readers.

Heavens Aground (Treble and the Lost Boys, Book 2)

Ryley Skye can’t take anything seriously. Not the murder scenes he investigates, nor the fact that he’s cheating on his boyfriend. Not the bloody nightmares he gets every other night, and especially not Vic’s ridiculous theory that Ryley might be a mage.

Magic? Him? There’s just no way.

When Vic decides he’s had enough of Ryley’s cheating and breaks things off, it couldn’t come at a worse time. They’ve just been handed a case that will require them to work closely together, whether they like it or not. But Ryley plays along. He has to. He can’t afford any kind of confrontation. Things happen when he gets angry or aroused. Weird things. Bad things. He has to stay bottled up and in control at all times.

Then he meets Asher Arden, and indulges in what he thinks is a little rebound fling. But when Ryley loses control and puts Asher’s life at risk, he realizes two things: He loves Asher more than anything else in the world…

And Vic just might have been right all along.

When Victor Lucius was sixteen years old, a few cruel words out of his mouth led to a brutal tragedy, one that Vic has been trying to make up for ever since. Now, working as a missing persons expert, Vic tracks down and rescues people from abandonment or abuse, trying to alleviate the guilt constantly weighing him down.

His latest case—a boy who was kidnapped at the age of two and then held captive for nineteen years—is by far the darkest of his career. If there’s any chance of Vic finally redeeming himself, helping this boy might be it.

But rescuing Colby from his basement prison is only the beginning, and brings a whole new struggle to Vic’s life:

Surviving Death: A Treble and the Lost Boys Novella

How can you find purpose when you’re already dead?

Cam Lucius has always felt useless and helpless, but never so much as the day his father pulled the plug, ending Cam’s life. As a ghost, there are only a handful of people who can see Cam, leaving him lonelier than ever.

Until he meets Taylor.

Taylor Ainsley can’t touch anything without suffering, leaving him isolated from family and abandoned by friends. As for ever having a boyfriend? Not a chance.

Until he meets Cam.

Taylor can touch Cam without pain, and Cam may not be as straight as he thought he was.

Now Cam is determined to help Taylor find a reason to live.

Until that plan puts Taylor right in harm’s way.

Note: This story is a spin-off of Illumined Shadows (Treble and the Lost Boys, 3) and thus should not be read as a standalone.

WARNING: Contains references to past trauma and discussions of topics that may be upsetting to some readers. Caution is advised.