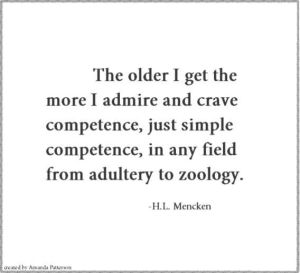 I found this image on Pinterest this morning, and though it has an element of humor to it, it also really strikes home on something that really bothers me about the modern world.

It’s so frustrating, on a daily basis, having to deal with people who have no competence whatsoever. I find myself doing other people’s jobs for them more often than not because they simply aren’t capable (or, even worse, just don’t care). It is such a rare and precious thing these days to encounter someone who actually does something well, and I tend to be almost worshipful of that.

So many of us stop at “just good enough” or the bare minimum. So few go the extra mile. So many do just enough to get by. So few take pains to do something completely and well.

Should we be perfect? Of course not. We’re human. That’s impossible. But there is an enormous difference between doing just enough and doing something with competence.

I’m guilty myself when it comes to certain things. I know that. I’ll be the first to admit it. But as I look out at the world, I find it becoming so rampant and all-encompassing that it’s utterly depressing.

Perhaps that’s another reason why I disappear into my stories, and idolize certain people. There’s no true craftsmanship anymore, except in rare occasions — and when I see it, I feel almost brought back to life.

As an example: I was walking around my local neighborhood one day, a few years ago, and passed by a house with the most exquisite concrete work I’d ever seen.

I know, a rather silly example, is it not? But completely true. Concrete, as a rule, doesn’t exactly inspire, but I was so struck by how beautifully this path and stairway was constructed that I actually had to stop and stare. I’d never seen anything like it done with such care and precision.

And the same can be applied to just about anything else we encounter on a daily basis. The saying “They just don’t make things like they used to” is painfully accurate. The same could also be said, not just for things, but for services. Actions and behaviors are done with minimal effort, just as things are made with minimal care and quality. But on that rare occasion when one finds something well-made, or a service well-provided, ah! Now there is something to treasure — perhaps even to celebrate.

Yet it remains such a rare thing, and the lack so disappointing. After spending an entire day in the company of the general public, as well as those who work in related industries and can’t seem to do their jobs to save their lives, at the end of the day I simply crave escape.

Thus, my stories. True, my characters aren’t perfect (indeed, they can’t be, or there would be no stories to tell), but they allow me to take a step back from a disappointing world and delve into something a little bit better, where I can encounter a phenomenal musician, or a dedicated security officer, or a precise scientist. For a few hours, I can turn my back on the dull, the mundane, and the “just good enough”, and immerse myself in the lives of people who truly care about what they do, and in doing it well.

This isn’t even restricted to the realm of work, either. The same can be said of relationships or just about any other aspect of life. I was watching Miss Austen Regrets last night, and one line in particular stood out to me: “My darling girl, this is the real world. The only way to get a man like Mr Darcy is to make him up.”

Whether it be within families or romantic relationships, people just don’t seem to take the time and care they once did. Everything is a matter of taking people for granted, or making assumptions, or not communicating, rather than really trying to be present for the people we claim to love. Mr Darcy seems not to exist in the real world because no one strives to be him — and by this, I don’t mean just someone like the character, but the general idea behind that sentence, in terms of all people: We have all these ideas of how families and relationships ought to be, but few of us seem to take pains to be those people for others, so neither can we find those people for ourselves.

Hence, again, I find people disappointing, and disappear into the lives of my characters, or the characters of others. Fiction gives the relief of being able to live, just for a moment, in the lives and with the people we’d wish to encounter in the real world, yet find sorely lacking. We devour works on brave adventurers and romantic heroes and daring achievers because we find those grand, inspirational, competent people missing from the real world.

So, yes, funny as it is, I wouldn’t even mind finding someone in the real world who was competent at adultery. At least it would be a competence! Something done well, if one can be said to commit adultery well. I suppose it’s possible, morality aside…

Alright, we won’t go there. Perhaps we should stick to competence in zoology. Anyway, moving along…

So, please, for the love of all that is holy, whatever you do — in your work, your studies, your relationships, your hobbies — take pains, and do it well. It doesn’t have to be perfect, but at least go a step beyond.

And for those who show competence, go the extra mile, and do things well, you have my eternal thanks and adoration. I would actually love to meet you and shake your hand.

In the meantime, I suppose it’s back into my fictional world I go. I have a date with a man who is trying to escape from prison.

[Post title is from Act I, Scene 2 of William Shakespeare’s A Midsummer Night’s Dream]