Well, I finally did it. I left the day job. For almost two months now, I have technically been a full-time writer.

Technically. As in, not 100% accurate. Besides the fact that I do still go in to the office a couple hours each week (hey, those accounts aren’t going to reconcile themselves), I also haven’t actually been…well, you know…writing.

At least, I wasn’t for the first several weeks. Instead of writing, I found myself sleeping in, watching films, reading (oh my gods, so much reading), playing games on my phone, and generally avoiding the world. If it hadn’t been for paying bills at the office and the desperate urge to hit the gym each night, I probably wouldn’t have left the house at all.

And I was depressed. SO FUCKING DEPRESSED. Which totally threw me off. I would sit on my couch, staring out the window, with absolutely no motivation to do anything whatsoever, and wonder, “What the hells is wrong with me? I’ve finally got what I wanted. I’m away from the day job. I’m home. I have all this time on my hands, and I could be writing, and I should be happy, but I’m not. WHY?!?!”

Quite simple, really. Change is a bitch.

Yeah, I got what I wanted, but even so, it was change. Pure and simple. And my brain does not like change.

I felt completely lost without the routine I’ve held for the past 17 years. Spend that many years getting up at 5 am, getting to work at 7, working straight through until at least 5 pm, then going home and doing it all over again the next day…yeah, it’s hard to train the mind out of needing that schedule. My brain and body expected one thing, and suddenly I’d thrown something else entirely at them, and I didn’t know how to handle it.

So I spent the first few weeks of full-time authorhood doing abso-fucking-lutely nothing.

And in some ways, it was GLORIOUS.

I’ve complained for years that I had no time to really live because I was always working. But now? Now I can do anything. I can go see things I’ve never seen. I can spend time with people I never had time for before. I can go to the market on a Tuesday! Not strictly on Sundays, but a Tuesday! I can walk down to my favorite restaurant and enjoy a plate of strawberry-and-cream-cheese French toast while I write…on any day of the week! I know this probably all sounds so simple and silly, but it absolutely blows my mind.

(Seriously. Don’t become a workaholic. It’s soooo bad for you.)

Still, that transition was rough, and I had a hard time understanding why. One of my CrossFit coaches put it best: “It’s like you’ve been deep-sea diving for the past 17 years, and now you’re coming up for air. Going through decompression is going to take time.”

So, I rode out the transition, learned to stop hating myself for not getting anything done, and allowed myself to just enjoy the downtime. Now, I’m well into the next book. Not as far along as I’d hoped I’d be at this point in the year, but I’m finally making good progress, and having all these days stretched out in front of me that can be filled with nothing but writing — or whatever I want — is making the future look bright.

At this point, Addiction (Shifting Isles, Book 7) is about halfway done, and should be released within the next few months. After that, I’ll be diving into Blind Love (Book 8) and Libertas (Book 9) before taking another side-step like I did with the Matchmakers trilogy and throwing myself headlong into another m/m romance project, which will run alongside Shifting Isles books 8 and 9. Beyond those…well, too many other books to count. I swear, the ideas just won’t stop coming. (Speaking of which, I’ve also submitted a short story to the Agorist Writer’s Workshop 2017 fantasy anthology. Still waiting to hear if my story was accepted, but if it is, it’ll be one small part of the whole Shifting Isles experience. But more on that later…) And I finally have time to pursue them. 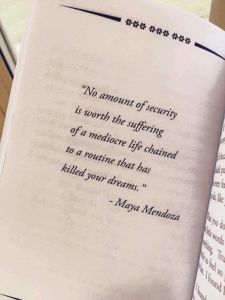 This can’t last forever. I know that. Unless the stars align and I somehow manage to become well-known enough that I can sell enough books to pay my bills, I know I’ll eventually have to go back to work. The money in my savings won’t just magically stay there. But, in the meantime, I’m going to embrace this chance I’ve given myself. I could have played it safe. Stayed at the day job. But then, I could die tomorrow and regret not having taken this chance while I could. And the more I think about it, the more I appreciate the idea that this was absolutely the right step for me.

Scary? Yes. Risky? Absolutely. But so worth it. I’m throwing everything on the line to pursue my dream, my passion. Will I succeed? Well, technically speaking, I already have.

I’m not a bestseller, and probably won’t ever be, but I’ve rearranged my life in order to be a full-time writer, and that in itself is the greatest gift I could have imagined.

1 thought on “Living the Dream”