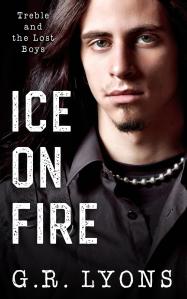 It’s release day! Ice on Fire, the first in a new m/m romance trilogy, Treble and the Lost Boys, is out today!

Blurb: Zac Cinder is on the verge of making his dream come true. His punk rock band, Inferno, might have a shot at an audition for a record deal. Fame and fortune would mean he could finally help his parents. They’d raised eight kids in a loving household while barely scraping by, so Zac is determined to give back in any way he can.

Keeping Inferno together, though, means keeping his biggest secret. His bigoted bandmates would drop him in an instant if they found out Zac was gay.

Then he meets Adrian Frost, and Zac can’t resist the shy man. Adrian gives up everything to be with Zac, but Zac can’t bring himself to do the same. He doesn’t want to lose Adrian, but he can’t give up Inferno, either. Not when he’s so close to realizing his dream.

When one cruel decision rips Adrian from his life, Zac will have to decide if ambition is worth the price of the greatest happiness he’s ever known.

WARNING: Contains scenes of self-harm that may be disturbing for some readers.

And check out the blog tour and giveaway HERE, courtesy of Signal Boost Promotions.